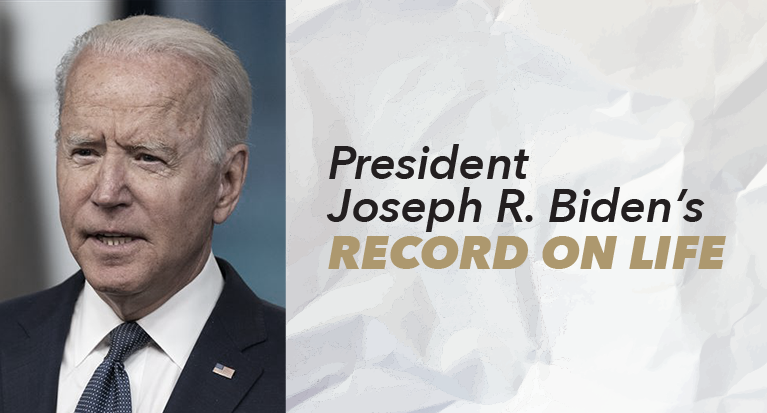 Every voter should be aware of where candidates stand on critical issues, and no issue is more critical than our right to life. Where does President Joe Biden stand?

Mexico City Policy
In one of his first acts in office, President Biden repealed the “Mexico City Policy,” which prevents tax dollars from being given to organizations that perform abortions or lobby to change the abortion laws of other countries.

Chemical Abortions
President Biden’s Food and Drug Administration (FDA) suspended protections established for women undergoing chemical abortions, such as seeing the abortionist in person. The in-person requirement ensured that complications like an ectopic pregnancy are ruled out in advance of a woman undergoing a chemical abortion. Mifepristone, the “abortion pill,” has no effect on an ectopic pregnancy and leaves the woman with this life-threatening medical condition.

Abortion Funding
Though he long supported the Hyde Amendment in the past, as a presidential candidate, President Biden changed his position in 2019. President Biden is now on record in support of eliminating the Hyde Amendment, which prevents the use of federal funds to pay for abortions except in cases of rape, incest, or to save the life of the mother. He signed the $1.9 trillion pandemic relief package, which included billions of dollars available for taxpayer-funded abortions.

Appointments
President Biden has surrounded himself with stalwart pro-abortion public officials, including Vice President Kamala Harris. His cabinet appointments include pro-abortion former congressman and former California Attorney General Xavier Becerra to head HHS, pro-abortion activist Samantha Power to head the U.S. Agency for International Development (USAID), and Chiquita Brooks-LaSure, who consulted for Planned Parenthood during the 2020 elections, to lead the Centers for Medicare and Medicaid Services.

Supreme Court
By executive order, President Biden created a commission to examine “reforms” to the U.S. Supreme Court and the federal judiciary, including the possibility of expanding the number of justices serving on the Supreme Court.

“Number one, we don’t know exactly what [Amy Coney Barrett] will do, although the expectation is that she very well may overrule Roe, and the only responsible response to that would be to pass legislation to make Roe the law of the land. That’s what I would do.” -Joseph R. Biden

Conscience Rights
President Biden’s Department of Justice refused to enforce federal conscience laws when they dropped a lawsuit in July 2021 against the University of Vermont Medical Center. The hospital was illegally forcing prolife nurses to participate in abortion procedures.

Who’s Missing in the 2020 Census?
Comments are closed.